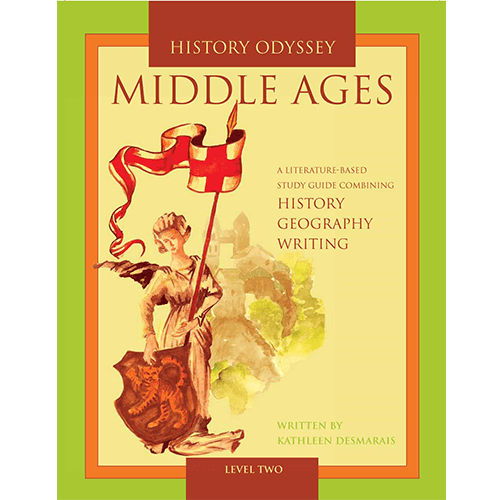 The following books must be obtained apart from the History Odyssey Middle Ages Level 2 Study Guide. You may use any version, eBook, or print edition of these books. This list includes both the required books and also alternate options (see the note **).

Disclosure: This list contains affiliate links. If you purchase after clicking one of the links, Pandia Press receives a small commission at no cost to you.

Optional Additional Reference Spine: The Story of Mankind * by Hendrik Willem Van Loon (optional) There is a free eBook edition of TSOM available at: www.gutenberg.org/ebooks/754.

The History Odyssey Timeline from Pandia Press (or a homemade timeline)

Other Required and Alternate/Additional Books:

One Thousand and One Arabian Nights retold by Geraldine McCaughrean

Alternate/Additional: Tales from the Arabian Nights by Donna Jo Napoli and Christina Balit. An illustration-heavy book that might be attractive to students on the younger end of this age group or for those who love a lot of artwork in their books.

Alternate/Additional: The Arabian Nights by Kate Doublas Wiggin and Nora A. Smith. Another collection that is beautifully illustrated by Maxfield Parrish with more sophisticated text.

The Door in the Wall by Marguerite de Angeli

Tales from Shakespeare by Charles and Mary Lamb

Alternate/Additional: Beowulf: An Illustrated Edition, translated by Seamus Heaney. For older students who might appreciate the poetic cadence of Beowulf, I recommend the illustrated edition of Seamus Heaney’s translation. It’s the closest to reading this epic poem without learning Old English and contains photos of period artifacts.

The Story of King Arthur and His Knights by Howard Pyle

The Adventures of Robin Hood by Roger Lancelyn Green

Alternate/Additional: Mosque and Cathedral David Macaulay can be read in addition to Castle.

Adam of the Road by Elizabeth Janet Gray

Alternate/Additional: The Midwife’s Apprentice by Karen Cushman. A classic that follows a teen girl as she becomes an apprentice to a midwife.  This book is a female-centered alternative option to Adam of the Road.

The Canterbury Tales by Geoffrey Chaucer, retold by Geraldine McCaughrean

The Trumpeter of Krakow by Eric P. Kelly

Additional books that could be added to Middle Ages Level Two

Anna of Byzantium by Tracy Barrett

**A note from Samantha Matalone Cook, who has created our alternate/additional book list for History Odyssey: Middle Ages Level 2:

As the world changes, so does historiography. The approaches and methods used to tell the story of history are rapidly evolving to reflect a more inclusive, holistic view of world history. There are new resources, materials, and research that, even in just the past few years, have revealed how history as a subject has missed, marginalized, or distorted the past for many people and communities.

As I work on writing a new History Odyssey series, my goal is to present middle and high school students with a history education that embodies an intersectional, balanced, global experience that connects them with concepts and skills while underlining the impact the past has had on current events.

In the meantime, I’ve created a list of some alternative books to use with the current History Odyssey Level Two series that are more aligned with the goals mentioned above but still fit within the framework of the existing curriculum.

Thanks for choosing History Odyssey,

*The Story of Mankind: Due to the polarizing nature of The Story of Mankind by Hendrick Van Loon, it is optional reading in this level two course. It should be considered a possible resource for gathering information. If students choose not to read TSOM, they might need to seek out other resources on the Internet or at a library in order to complete some of the lessons.

Layout of a medieval abby or monastery: https://www.timeref.com/life/abbey5.htm

For assistance in completing the Elements of an Epic worksheet: https://penlighten.com/epic-poetry-characteristics-elements-examples

This wikipedia page includes an area to scroll through an image of the entire Bayeux Tapestry: https://en.wikipedia.org/wiki/Bayeux_Tapestry

A video on becoming a knight: http://www.medievalchronicles.com/medieval-knights/becoming-a-knight/

Lesson 63. Constantinople and the End of Byzantium

How to Write a Haiku

History of the Anasazi: https://historytogo.utah.gov/anasazi/

Native People of the Arctic and Subarctic, National Geographic for Kids: https://kids.nationalgeographic.com/explore/native-americans/native-people-of-the-arctic-and-subarctic/

Map activity from PBS about the history of Africa through maps.  This includes the empires of Ghana, Mali, and the Songhai Empires so is valuable for this and the following lessons. It shows trade routes during the 4th -16th centuries in the Subsaharan region along with showing the changes in borders by 1914 and then beyond. https://wgvu.pbslearningmedia.org/resource/social-studies-236-mbe-r1-grades-6-12/a-history-of-africa-through-maps/

The PBS 6-part documentary called Africa’s Great Civilizations is excellent.  The 3rd episode (Empires of Gold) especially has great information about the Middle Ages in Africa. It is available for streaming on the PBS site (with a PBS streaming passport, which does have a cost). It may also be available for free on YouTube. Highly recommend the whole series. https://www.pbs.org/video/africas-great-civilizations-empires-gold-hour-three/

A brief History of Mali: https://www.thoughtco.com/brief-history-of-mali-44272

The History of the Mali Empire : https://about-history.com/the-history-of-the-mali-empire/

The Empire of Mali: The Twang of a Bow – Extra History – Video of Ghana/Mali history including Sundiata: https://www.youtube.com/watch?v=UkayShPilkw

Mansa Musa, one of the wealthiest people who ever lived TEDEd video :https://ed.ted.com/lessons/mansa-musa-one-of-the-wealthiest-people-who-ever-lived-jessica-smith

Stories about Benin legend- The Voodoo priests, kings, and ghosts of Benin: https://www.lonelyplanet.com/articles/benins-voodoo

The Kingdom of Benin: https://www.nationalgeographic.org/encyclopedia/kingdom-benin/

Who built Great Zimbabwe? and why? TEDEd video: https://ed.ted.com/lessons/who-built-great-zimbabwe-and-why-breeanna-elliott

This wonderful site has primary source information from the Tudors, including letters written by the six wives, Anne Boleyn’s speech at her execution, and other documents: https://englishhistory.net/

Europe in the Middle Ages

Grendal by John Gardner – The Beowulf epic from Grendal’s point of view.

Life on a Medieval Pilgrimage by Don Nardo

Dove and Sword: A Novel of Joan of Arc by Nancy Garden

Outrageous Women in the Middle Ages by Vicki Leaon

Men of Iron by Howard Pyle. Historic fiction. A young boy trains to be a knight in 15th century England.

Tales of the Norse Gods by Barbara Leonie Picard

Twelve Bright Trumpets by Margaret Leighton Twelve historic fiction stories that span the Middle Ages from the fall of Rome to the fall of Venice.

The Story of Rolf and the Viking Bow by Allen French

The Lantern Bearers by Rosemary Sutcliff – Historic fiction. The last Roman Auxiliaries are leaving Britain but one young legionnaire stays behind.

Sir Gawain and the Green Knight, Pearl, and Sir Orfeo by J.R.R. Tolkien

The Hidden Treasure of Galston by Eleanore M. Jewett

Sword Song by Rosemary Sutcliff – Historic fiction. A young Viking swordsman is banished from his home.

The Gauntlet by Ronald Welch – Peter travels back in time to 14th century Europe during the time of castles, hawking, and battles.

Joan of Arc: The Teenager Who Saved her Nation by Philip Wilkinson

Anna of Byzantium by Tracy Barrett

The Emperor’s Winding Sheet by Jill Paton Walsh – Historic fiction. The story of the fall of Constantinople and the end of the Byzantine Empire.

Saladin: Noble Prince of Islam by Diane Stanley – Beautifully illustrated book about the crusades form a Muslim point of view.

Genghis Khan and the Mongol Empire by Miriam Greenblatt

Ivan the Terrible by Thomas Butson

Sword of the Samurai: Adventure Stories from Japan by Eric Kimmel

A Single Shard by Linda Sue Park – Historic fiction. A look at a craftsman’s colony from Medieval Korea.

Before Columbus: The Americas Before 1491 by Charles Mann

DK Eyewitness Books: Aztec, Inca, & Maya: Discover the World of the Aztecs, Incas, and Mayas- their beliefs, rituals, and civilizations by DK

The Royal Kingdoms of Ghana, Mali, and Songhay: Life in Medieval Africa by Patricia and Frederick McKissack

The Kingdom of Benin in West Africa by Heather Milar

Sundiata: Lion King of Mali by David Wisniewski – For a slightly younger target age but full of beautiful illustrations.

Mansa Musa and the Empire of Mali by P. James Oliver

Europe in the Renaissance

Beware, Princess Elizabeth by Carolyn Meyer – Part of the Young Royals series. Tells the story of Elizabeth Tudor in her teenage years.

Elizabeth I, Red Rose of the House of Tudor by Katheryn Lasky – Part of the Royal Diary Series

Mary, Queen of Scots, Queen Without a Country by Katheryn Lasky – Part of the Royal Diary Series

Queen’s Own Fool, A Novel of Mary Queen of Scots by Jane Yolen and Robert J. Harris

Fine Print: A Story About Johann Gutenberg by Joann Johansen

Please see our full line of products in our Pandia Store.

Get Social with Pandia Press

Won't you be our friend?
Follow Pandia Press on social media for all the extras.